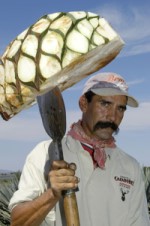 The Jimador uses a special tool, a Coa, which is a long wooden handle with a sharp circle cutting blade at the bottom. He thrusts the Coa with an exact precision to cut the leaves (Pencas) off of the Agave and reveal the core, which is called the piña. The piña looks like a large pineapple, and can weigh as much as 150 pounds.

From there the piñas are loaded on horses and/or trucks and taken back to the distillery.