I first tasted 4 Copas Tequila at the Spirits of Mexico event last fall in San Diego and enjoyed the entire lineup. I remember talking with the gents from 4 Copas (Chris Melendez, President/CEO, Enrico Caruso, SVP National Sales Director, Don Hogan, Friend of 4 Copas) as they were introducing their new 4 Copas Organic Agave Nectar, and serving sliced roasted Agave along with their fine Tequila. 4 Copas Organic Agave Nectar is due to hit the shelves any day now. What better product to use in a mixed drink than another natural and pure Agave sweetener... a wonderful addition that enhances the taste of the Tequila. 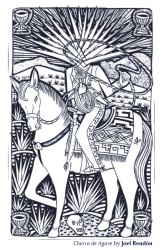 Their beautiful hand-blown bottles are adorned with the artwork of artist Joel Rendon of Mexico. Part of a 10 piece series, Joel's artwork blends the historical appreciation and reverence for the agave, the dead, the horse, and tequila.

4 Copas has been running strong for several years now and they have much to show for their tasty Agave products and hard work in such a short time period.

Two years in a row (2005-2006), 4 Copas Tequila took home the Gold, Silver, and Bronze medals at the San Francisco World Spirits Competition . And to end an already spectacular year, 4 Copas Reposado was included in Wine and Spirits Magazine in "The Best of 2006" year end issue for Tequila of the year.

In mid 2006, 4 Copas partnered with world famous celebrity Chef Sam Choy of Hawaii to promote their Tequila brand and entertained/showcased their products at the following events:

4 Copas Tequila has definitely carved a name in the Tequila industry, and are strong contenders in the ring of premium Tequilas! 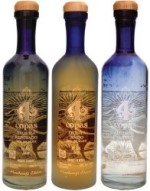