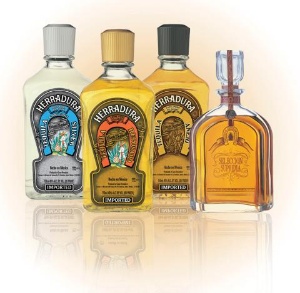 LOUISVILLE, Ky.--(BUSINESS WIRE)--Wine Enthusiast magazine has selected Casa Herradura as “Distiller of the Year” at its 2007 Annual Wine Star Awards competition. Casa Herradura, founded in 1870, is the first tequila distillery to win this prestigious award.

“We are honored that Wine Enthusiast has selected Casa Herradura as the 2007 Distiller of the Year,” said John Hayes, Managing Director for Herradura Brands. “At Brown-Forman, we will be toasting the eight generations of the Romo family, the founders of Tequila Herradura, and everyone at Casa Herradura for making us so proud.”

There were 45 nominees in nine award categories ranging from “Winemaker of the Year” to “Importer of the Year”. Casa Herradura was selected for its outstanding contributions to the world of spirits, with special attention to achievements recorded in 2007.

“We had more qualified candidates than ever this year, from a wider range of wine regions,” says Adam Strum, Editor & Publisher of Wine Enthusiast. “The traditional companies are showing vision in maintaining and improving the classics, while the newer companies are bold and creative. Both are pushing the boundaries further, and contributing to the growth and enjoyment of tine wine and spirits throughout the world.”

Casa Herradura is one of the oldest and most respected producers of Tequila. Founded by Ambrosio Rosales and Aurelio Lopez, Casa Herradura is a Mexican treasure that, many believe, delivers the world's highest quality, most authentic tequila experience because of the expertise and leadership it has developed since 1870. Located and produced in the heart of Mexico’s tequila region, in the tiny town of Amatitan, Jalisco, just outside of Guadalajara, Tequila Herradura is 100 percent blue agave tequila carefully crafted using traditional methods, such as cooking the agave in clay ovens and fermenting naturally with wild yeast. Tequila Herradura is all natural and estate bottled.