Tequila, Jalisco, Mexico – Jose Hermosillo, Chairman and CEO, Casa Noble Tequila proudly announced today that music icon Carlos Santana has joined the Board and is now one of the owners of the brand. This new organizational change will allow Santana to be involved in the continued development of the brand which is already recognized as one of the finest handcrafted spirits in the world.

"Santana’s love for the spirit of Casa Noble and his commitment to this new partnership is exciting for everyone involved with our brand," says Casa Noble CEO Jose Hermosillo. "Santana’s personal philosophy of quality and integrity in the pursuit of perfection is synonymous with the Casa Noble brand of fine ultra premium Tequilas.”

“The linkage between Casa Noble & Carlos Santana will create broader recognition that Casa Noble’s triple distilled, organically certified tequila is truly one of the finest ultra premium spirits” says Hermosillo. "We have been exploring this partnership for some time. This is a natural synergy; Casa Noble Tequila is deeply rooted in the pursuit of quality, craftsmanship and tradition. Santana through his life and his music has dedicated himself to those same values which are the key motivators behind this alignment.”

"We have come together because I love the Tequila," Carlos Santana said. "Passion, dedication and integrity is what attracted me to Casa Noble Tequila. I feel at home with my new family at Casa Noble. They strive for excellence and don’t take shortcuts. Just like the music of Santana, one note or one drop… they are the same thing. You have to feel each note from your heart. Casa Noble and my family have the same origin--- Jalisco, Mexico. My family roots date back to the 1700’s in Jalisco. My father is a Huichol Indian. When I visited the distillery, I immediately felt spiritually connected to the Hermosillo family and Casa Noble. Together we celebrate the gift of life and all of the blessing that come with it. Together we can all make a difference in the world."

While the details of the deal were not made public, the partnership for Mr. Santana shares ownership in the company and a long-term commitment to the continued growth of Casa Noble and its family of fine ultra premium tequilas. “We anticipate Santana’s fans all over the world will share not only his passion for music but also his passion for Casa Noble Tequila,” said Hermosillo. 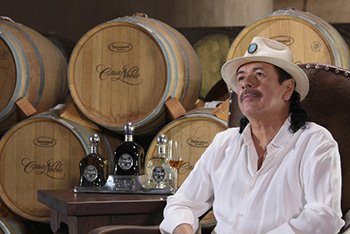 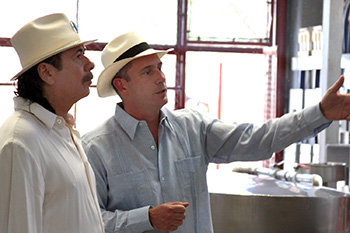 About Casa Noble Tequila
A renowned boutique distillery, Casa Noble represents the pride, passion, and quality commitment of more than 200 years and over 7 generations of tequila production. The Casa Noble family of Single Estate Organic tequilas—Crystal, Reposado, and Añejo— has a rich history that has earned them a position as one of the finest ultra premium spirits portfolios in the world. Casa Noble’s handcrafted tequilas are exported to over 23 countries worldwide and currently available in premium retail outlets, exclusive restaurants, distinguished bars and lounges, and destination hotels Nationwide in the U.S.

Casa Noble is produced on a family owned distillery that can trace it’s roots back to 1776 along the hillsides of Jalisco surrounded by citrus and mango trees, which are integral to the tequila’s unique taste profile. Our tequila is harvested, distilled and bottled on the private family estate that boasts over 6,500 acres of land and more than one million blue agave plants.

Casa Noble Single Estate agaves are harvested at their peak maturity when they are 10-12 years of age and when each plant has met strict requirements for water and sugar content. Traditional elaboration methods like slow cooking in stone ovens create a superior mosto juice extracted from the core and hearts of the agaves. The fermentation process is 100% natural, allowing the tequila to be influenced by the character of the agave, but also mango and citrus trees and other plants that surround the hacienda. The tequila is then slowly triple distilled to preserve the unique aromas and flavor notes. Casa Noble Crystal serves as the extraordinary foundation upon which Reposado and Añejo are developed. For more information visit www.casanoble.com

About Carlos Santana
For forty years and as many albums later, Santana has sold more than 90 million records and reached more than 100 million fans at concerts worldwide. To date, Santana has won ten Grammy® Awards, including a record-tying nine for a single project, 1999’s Supernatural (including Album of the Year and Record of the Year for “Smooth”). In 1998, the group was ushered into the Rock and Roll Hall of Fame, whose web page on their induction notes, “Guitarist Carlos Santana is one of rock’s true virtuosos and guiding lights.” Among many other honors, Carlos Santana has also been cited by Rolling Stone as #15 on their list of the “100 Greatest Guitarists of All Time.” Santana joins the ranks of the Rolling Stones as the only musical act in chart history to score at least one Top 10 album in every decade beginning with the 1960s. His latest CD, GUITAR HEAVEN, Santana’s 29th Billboard Top 200 charting release, 12th Top 10 album debut and third Top 10 debut in the past 5 years.

Santana’s Lifestyle company River Of Colors is dedicated to bringing exciting product to the world which embodies the passion and integrity of Carlos Santana. Founded in 1997, River Of Colors (ROC), has enjoyed tremendous success with product lines such as the Carlos by Carlos Santana and Unity by Carlos Santana brand names encompassing shoes, handbags, and headwear as well as noted musical instruments including electric guitars, hand percussion and sparkling wine. For more information visit www.santana.com