Tequila Enlivens Day of the Dead 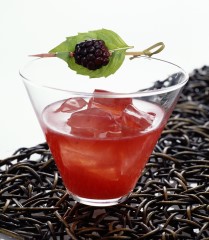 Tequila's profile is never higher in Mexico than during Dia de los Muertos, literally the Day of the Dead but in reality a longer event that this year will begin on Sunday and end the following Friday.

There is nothing as quintessentially Mexican as El Dia de los Muertos, a festival that has been part of the culture since before the Spanish invaders. Originally held in July, but moved closer to All Saint's Eve in November by Catholic priests brought in by the conquistadors, it is anything but a morbid or frivolous event.

Families construct tiny temporary altars, festooned with large, colorful marigolds and chrysanthemums, near the doorways to their homes to welcome back the departed. Crowds stroll throughout the towns and cities to see and be seen. Vendors line both sides of many streets, selling foods, trinkets and crafts.

In the city of Guanajuato last year, I joined a stream of walkers headed for a large cemetery where they visited the graves of their loved ones, replacing wilted flowers with fresh, often washing down the stone or metal markers with pails of water purchased from entrepreneurial youngsters who set up shop at the cemetery gates.

Artwork for the Day of the Dead features skeletons involved in all sorts of earthly pursuits, playing instruments, dancing, eating and -- most important to some -- drinking.

This year, noted San Francisco mixologist Duggan McDonnell -- whose Cantina restaurant-bar has a great drinks menu -- came up with a lineup of tequila-based cocktails to celebrate the holiday for the Don Julio line that is Mexico's top-selling high-end tequila. Most include agave nectar, a non-alcoholic sweetener made from the same blue agave plant used to create tequila. It is widely available online and in some specialty shops.

One is the Smoky Diablo that blends limoncello, grapefruit juice, agave nectar and tequila with a sprinkle of chili powder. Another is the Jalisco Sidecar, named for the Mexican state where most tequila is produced, made with aged tequila, Grand Marnier, fresh lemon juice and orange bitters.

But my favorite is the Black Widow (shown above) with a superb contrast of berries and herbs. The recipe:

Muddle 2 blackberries and 3 basil leaves in a Boston shaker. Add the tequila, lime juice, agave nectar and ice to the shaker. Shake well. Strain contents into a stemless martini glass or similar glass over ice and garnish with a blackberry and basil leaf on a toothpick. Serves one.